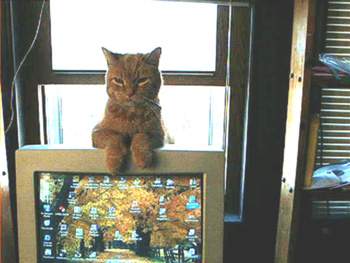 Lewie came to me in the late fall of 1989, under the strangest of circumstances. It was November, cold and snowing, and I was at a party at a friend’s farm in upstate NY. Being a farm, there were plenty of cats and kittens around, but they were barn cats, outside cats, not allowed in the house. The party was in full swing, and suddenly I heard my farmer-friend yell: “Hey, somebody step on that %&!$#* cat! Get that thing out of the house!” I looked through the tangled mess of legs and feet to see this tiny kitten, perhaps a week old, staring back at me from halfway across the room. Nobody knew how he got from the barn to the house (quite some distance), nor how he got inside the house, but there he was. I yelled for people to hold up, to watch out. He stood on wobbly legs that barely held him up, mucous running from his eyes and nose…staring straight at me. Slowly, unsteadily, he began the trek across that floor, through that hoard of partiers. Eventually he made it, bumped into my shoe, and looked up at me with a pathetic plea that took my heart out by the roots. To the farmer, it was a damn cat in the house; to me it was the beginning of Lewis & Garry.

Needless to say, he went home in my shirt pocket, dripping snot everywhere and I didn’t even care. I took him to an emergency vet who condemned him on the spot: “Too young, too small, dehydrated, suffering from malnutrition, severe upper-respiratory problems, too sick…he won’t make it through the night.” That’s when I discovered that money does make a difference. I wrote the man a blank check, signed it, and told him to fill in the numbers when (not if) the cat, as yet un-named, was healthy enough to come home. Three days later I got the call, and Lewie has been with me ever since.

I was a pilot for a number of years, and when I flew, Lewie flew. It caused some problems and we broke more than a few of the rules, but those were my terms. Once, I lost him at Piarco International in Trinidad, Port of Spain. Since this is a place where cat-meat is a delicacy, I paid $800 for an impromptu search party, and after intensively scouring the whole airport, guess where we found him? Tucked in a little cranny beside the pilot’s seat-my seat-sound asleep on one of my sweaty old t-shirts! Another time, I chartered a group of businessmen to Austria, and Customs wouldn’t let me off the plane unless I handed Lewie over to their bureau of agriculture…so he and I slept on the plane for four days!

Kathy tells me to describe Lewie, and it’s difficult: How do you describe a cat that kisses you whenever you ask (and sometimes when you don’t ask, like at 3AM or so), who cannot rest unless some part of him is touching some part of you, who suffers when you suffer, and who gives nothing but love no matter how poorly you neglect him?

Lewie just loves; that’s all he knows how to do. Admittedly, the brat has cost me more than one interesting date who said “That damn cat isn’t sleeping on the bed!”, to which I reply: “Actually he is, but you aren’t; your invitation just expired.” I could tell you tons of silly stories, like the time we nearly got run over by a meat truck when I had to stop to pull the long, green, stringy stuff from his nose to keep him from suffocating. We’ve had a tough, crazy life, he and I. And now my best friend is sick. It’s my turn to give back a small part of all that he’s given to me, and you can bet that I will. I’m his whole life, he has nowhere else to turn, and I’ll be there for him no matter what. We’ll tackle this thing with everything we’ve got, and if it’s God’s will. . . we’ll win.

Click here to read how Lewie allows Garry to Assist Feed Him! 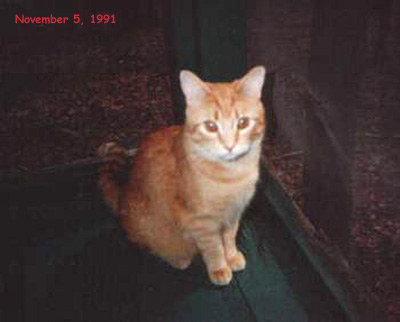 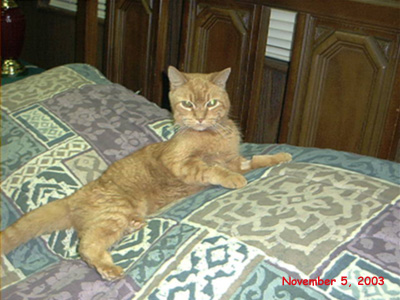 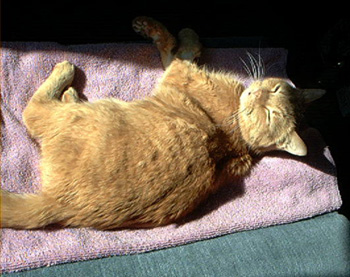 November 10, 2003
Well, as you can see, Lewie is feeling pretty chipper this morning. Soon as the sun peeped out, we had to find a window and work on our tan.

(Pssst… my best friend wanted to show off his great looks, too, so I just had to oblige. Kinda bending the rules a bit here… but sneak a peek at my bud Clark…)