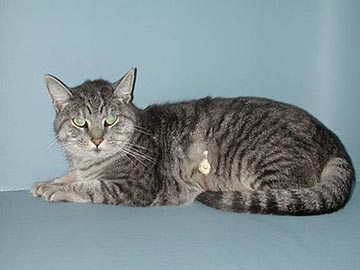 In mid-August, 2000, we noticed that, Sam, our 3 year old male tiger striped kitty, had started to lose weight and had lost interest in eating. Although a picky eater, he typically weighed around 10.5 pounds. We initially thought his appetite might be off due to the hot weather since all the cats seemed to spend less time eating and more time than normal sleeping. But suddenly Sam looked thin, his coat had lost its gloss and instead of chasing the other three cats, he stopped playing and began hiding in the closet to sleep. Since he had always been a bundle of energy, this was really a change in his personality.

We took him to our vet for an exam and had blood work done. Once on the scale, we found out that he weighed just over 7 pounds, but even more shocking was the initial diagnosis: he was anemic and had CRF! We could not believe it. After all, he was only 3 years old and isn’t CRF an “older kitty’s” disease? Thankfully our vet, Dr. Olivia Jaeger, a graduate of the University of Florida, Gainesville, referred us to the U of FL veterinary hospital. She is very familiar with their kidney transplant program and since we wanted to explore all options to help Sam, she thought we should have him evaluated to see if he was a candidate for a kidney transplant.

After a weekend of force feeding, antibiotics, and sub-q’s, all done at the emergency clinic, we were on our way to Gainesville to see what could be done to help Sam. We were fortunate enough to have Sam assigned to Dr. Julie Levy, a name familiar to many of you through the recent postings about her research on alternatives for treating feline anemia, and also her work with feral cats. Dr. Levy and her student doctor assistant Crissy, were instrumental in saving Sam’s life. Two days after admitting Sam to the hospital, Dr. Levy called to tell us that Sam’s anemia and CRF were actually a result of a very rare mycobacterial infection which had invaded his kidneys and bone marrow.

The initial diagnosis was mycobactium avium (M. Avium), however after many months of waiting for the culture to come back, the final diagnosis was mycobactrium xenopi (M. Xenopi). M. Avium is a common infection in people who are HIV positive or have AIDS. M. Xenopi is pretty rare and there are not many reported cases of the disease. Sam was tested repeatedly for FIV and FELV and all tests came back negative, so the missing piece of the puzzle is why he came down with this disease.

Both m. Avium and m. Xenopi are extremely rare in cats, making it very difficult for the doctors to know what drugs to use for treatment. In addition, many of the drugs used to treat these infections in humans are toxic to cats. Dr. Levy told us that in almost all cases, these mycobacterial infections were not discovered until an autopsy was done on the cat. In the few cases where it had been diagnosed in living animals, the prognosis was not good because the disease was far advanced before it was correctly diagnosed, and the animals typically died within a few months after the diagnosis and treatment.

Dr. Levy and Crissy spent hours reviewing AIDS and HIV information sites and data, contacting other veterinary teaching hospitals, and researching drugs to determine how to treat Sam. There is very little printed information available on m. Avium in cats and none that we have found on m. Xenopi. But in addition to determining the correct medications for Sam, we had a bigger problem – he still refused to eat.

Despite transfusions and epogen treatments to build up his blood, and valium and other medications used to enhance his appetite, he just would not eat. They tried foods normally attractive to cats (tuna, salmon, etc.), they tried force feeding, and they also tried a nasal tube, which he pulled out. This typically docile cat became a tiger the minute the “satellite dish collar” was placed around his neck so he would not dislodge the nasal tube. Worse yet, Sam totally went crazy when anyone came near his mouth to administer medication. As ill as he was, he just would not be pilled without a fight!!

After treating Sam for a few days, Dr. Levy called and asked our permission o insert a ‘peg’ tube into Sam’s stomach. She told us that he had become anorexic (common in CRF and anemic cats as many of you know) and he had also developed food aversion, probably as a result of trying to conceal medication in his food and also trying to pill him. The feeding tube would allow him to receive nourishment, and would also allow the administration of medication that could be formulated into a liquid. Like most people, we really had second thoughts about allowing this procedure. How would Sam react to this? Would this really help? Were we doing more harm than good?

When Dr. Levy told us that Sam probably would not survive much longer without a better means to feed him, we gave the go ahead for the surgery. We can honestly tell you now, it was the best thing we could have done for Sam and believe it is instrumental in saving his life. Sam finally began to turn the corner and after two weeks, on September 3rd, he was released and sent home with “tube feeding instructions”.

Like many of you who are administering meds, sub-q’s, food and vitamins, we have a feeding and medication routine which requires diligence on our part. Sam receives 70 mls of Purina CNM (mixed in food processor with canned pumpkin and a bit of water, then put through a strainer to get out the lumps) and ½ an eyedropper of hi-vite vitamins two times a day through his feeding tube. He also receives 3 different medications twice a day through his tube and instead of giving Sam sub-q’s, all his fluids (160 mls/day) go in through the tube as well.

No needles, no pilling, no force feeding and the best part is much less stress for both us and Sam. When feeding or medication time comes, Sam lays on his side and lets us do the work. We have even fed and medicated him while he was sleeping! Sam doesn’t chew on the tube – he basically ignores it. All it requires is cleaning with water and a q-tip after each use and turning ½ turn daily – that’s it!

Sam has finally started to eat a few CNM kibbles and a teaspoon of Fancy Feast (not kidney food, but Dr. Levy said the important thing is to get him to eat) a couple of times a day on his own, however, his intake is not sufficient to sustain his weight or nutritional requirements.

This story had gotten very long and we won’t elaborate on with some of the ups and downs we’ve had in treating Sam’s disease. Our main purpose in telling Sam’s story is to let you know that feeding tubes can help save your cat and will make life much easier for both you – it has for us! While we acknowledge that the tube may not be the solution for everyone, we felt it was worthwhile to share the information.

As far as Sam’s condition, Dr. Levy determined that he most likely contracted m. Xenopi because he has a compromised immune system, which she feels is probably genetic. Sam was a stray, so we have no data on his mom or dad. He has a low CD4 count, a condition which is rare in humans and even more rare in cats, so he is not able to fight off infections. This has unfortunately also eliminated him as a candidate for a kidney transplant as he cannot have the drugs necessary to prevent organ rejection. Dr. Levy believes that we have found a combination of medications (clarithromycin, ciproflaxicin and rifampin) which we are hoping will put Sam’s infection into remission. While we may never be able to cure Sam’s bacterial infection completely, he is doing very well and is back to the same sweet, playful boy he was before becoming ill.

The picture of Sam was taken in April 2001 during his last check-up with Dr. Levy. As of this writing, he has had the tube for 10 months and it was replaced during his visit because the outside of the tube was wearing out. Sam loves to roll around on the screened in lanai and the tube gets rubbed against the cement! Dr. Levy said the tubes typically last about a year and are replaced in a very quick surgical procedure. He was (and still is) a healthy 10.5 pounds when this picture was taken and Dr. Levy could not believe how wonderful he looked. She was taking him all through her lab to show the other doctors and students Sam and his tube.

We would like to acknowledge the superb level of care Sam received while at the University of Florida veterinary hospital by Dr. Levy and her staff. After he arrived in August, he spent 2 weeks in the ICU and we can honestly tell you he had the absolute best care we could have hoped for. We are thankful to the doctors and students (doctors in training) for their loving care, concern and the wonderful treatment Sam received. While we still make periodic visits to his regular vet, he continues to go back to Gainesville every few months to have bone marrow and kidney biopsies to determine the level of infection in his system.

If you are a member of the the Yahoo! group “Feline_Anemia” or if you sign up to be a member, please read the article at the link (the site is password protected):
http://groups.yahoo.com/group/Feline_Anemia/files/sammy_feeding%20tube.docon “Feeding pets that won’t eat”, as it may provide some help to those of you struggling with this issue. If clicking on the link doesn’t work, you can also cut and paste it into your browser.

Thank you for letting us share Sam’s story. If you have any questions for us, please write us at bjhsgh99@Peganet.com.

P.S. Please help support Dr. Levy’s research through Dr. Kathy’s fund. On behalf of Sammy and all the other kitties with anemia, we thank you.

P.S.S. It is May 2004 and Sam has had his feeding tube for over 3-1/2 years and is still doing well. He is up to 12 pounds and is receiving only 2 medications daily along with his regular tube feeding.