So.what’s in the can, man? That’s what it’s really all about, isn’t it? The right food isn’t determined by what a manufacturer tells us, or what Suzie across the street tells us, or not even the vet who assures us that what he sells is the best. It’s about what’s in.that.can! Today we’re going to take a very close look at the nutritional values of two different foods. We’ll compare the differences, and we’ll talk a little bit about what those differences mean to Fluffy. But before we get into all of that, let me make something clear: Most brand-name manufacturers meet strict, minimum nutritional guidelines set forth by AAFCO; your kitty isn’t going to fall over dead from eating a can of food that you can buy off the shelf at Stop ‘N’ Go. But he/she may live a longer, happier, healthier life if we pay attention to what’s in that food. I’m a prime example: If I keep eating those juicy Ribeyes, I’ll be lucky if I make it to age 30!

Anyway, let’s get started. First of all, I picked up a can of something that many of us probably feed our kitty every day, and we’ll call this one Brand-Z. Then I took a can from my “preferred stock”, which I acquired a few weeks ago when we all went shopping.remember? We’ll call this one

Brand-A. Next, I called each manufacturer and said a few things that made me hope Pinocchio was just a fairy tale. But I got what I wanted.information! Nutrient Reference Charts! Next, I fired up that handy-dandy Nutritional Calculator that we created for you, I plugged in Brand-A data, then Brand-Z data. Keep in mind that this is “AS-FED” information, meaning the manufacturer established these values based on what’s in the can, water and all, and I tell you.the differences weren’t all that striking. The chart below shows both brands side-by-side, and if I were to make a decision based on this alone, I’d be inclined to think that either food is just fine. I mean sure, there are differences, but I don’t see startling contrasts. Do you? 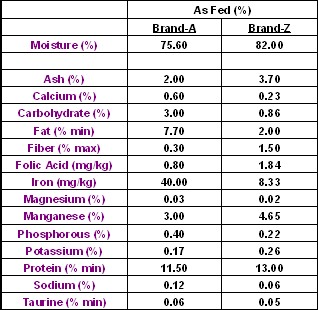 But then I remembered something I said about water (moisture) making a difference, and since I do much better with pictures than with numbers, I looked at the two foods this way: 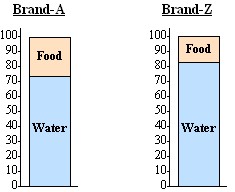 Well now! Seeing them this way, it’s obvious that Brand-A has nearly twice as much actual food in the can as Brand-Z! That’s important, but that’s only part of it. The crucial factor is what’s in that actual food, not the water; we don’t care about the water, because there are no nutrients in water. So what are we saying, here? Well, we’re saying that although the percentages were somewhat similar in the first chart, they were misleading because they included water in the percentage calculations! As we know, in order to determine the true content of nutrients, we calculate based on what’s left when we remove the water.dry-matter. Real food. The Nutrition Calculator did this for us, too, and here’s what these two foods look like when we subtract the water. Ohmigosh. 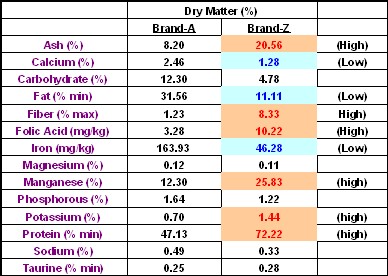 I chose only a few of the nutrients for this exercise, but the picture is clear.and alarming. What appeared to be similar foods at first glance, are not alike at all. The differences are drastic, and they’re important to a cat’s long-term health. Problem is; they weren’t obvious, either via can-label, or even from the Nutrient Reference Chart.they didn’t fall in our laps. We have to care enough to look for them, and not rely on cursory (or marketing) information. Fact: Prior to letting the Nutrition Calculator tell me what’s really going on, I didn’t –couldn’t– know either, but the numbers above tell us that feeding Fluffy a strict diet of Brand-Z for years could expose her to the risk of Sturvite crystals (urinary tract blockage), heart problems, liver and kidney problems, and pancreatitis.

Yes, it’s a little effort on our part, but most manufacturers have a 1-800 number, so the call is free (and so are their Nutrient Reference Charts). The Nutrition Calculator does all the work for us, so all we have to do is plug in the numbers and read the results. Is Fluffy worth it?

Disclaimer: Kathy Fatheree is not at all a medical expert. Contents of this web site are a collection of Kathy’s assist feeding experiences as well as the experiences of other cat owners who have assist fed their cats. While every effort has been made to ensure the accuracy of the information, Kathy Fatheree or anyone associated with this web site cannot be held responsible for anything that may happen as a result of using the information on this site.