Well, if ever there was a controversial topic, this is certainly one: Changing our cat’s diet.  The controversy begins with the dubious notion as to whether or not it’s even necessary in the first place, and ends with what approach one might (should/shouldn’t take) assuming a diet change is implemented.  Discussing this reminds me of the time I was silly enough to become a Little League coach for the team my boys played on.no possible way to avoid upsetting someone.  Regardless, it’s a topic that warrants discussion, so I’ll give you my own views on it, which are based primarily on unified research.

First, the concept of “never change the diet” seems to be an old philosophy; I see more and more vets and nutrition experts advising that we should add a little variety.  Okay, now the questions comes to mind.when and why?  The ‘why‘ is easy, and can be reduced to two answers:  One, the essence of variety piques their interest in food generally, and helps drive the appetite.  Two, medical reasons:  Sometimes we have to change the diet due to ailment requirements.  As for the ‘when‘, I think it falls back to common sense; when we need to, or when we think a periodic change might perk up their demeanor a little.  Or maybe just for the pure heck of it!  Given the older theories (and a few current ones, I have to admit), a kitty’s digestive system could not tolerate change at all, but we’ve learned that’s simply not true, so if we’re careful about what we change to, the risk of systematic upset is essentially nil.

Ooops.I almost forgot to mention ‘how‘, didn’t I?  Well, unless we’re talking about a random plate of different food (which really isn’t a diet change), the process of changing a kitty’s regular diet should be done slowly.  That’s especially true if we’re going from a favored food to one less favorable.  The consensus approach seems to be “wean in the new food gradually”.a few teaspoons of the ‘new’ mixed with the ‘old’ for a week, then begin adding a teaspoon each week until the dilution has crossed well over to the other side.

It’s odd that I’m even mentioning this topic, because you know I’m big on conventional, proven methods.  But there are instances when we have to question whether a protocol was established from fact, theory, or just plain unqualified jabber.  And on this path, technical medical science is proving that diet change does not wreck a kitty’s digestive system, as was once believed, and I have to go with that.

Assist Feeding
Bert’s PEG Tube is OUT!
by Kathy Fatheree

Bert had his tube out on Friday! It went absolutely perfect, no problems at all! Bert’s tube removal was almost two weeks since he started eating!

For the procedure, we went in and the first thing they did was weigh him. They wanted to make sure that he wasn’t dropping too much weight since he has been eating on his own. If he had been too thin we would have had to have kept the tube in for another week. However, it turns out that Bert had only lost 1/2 lb since his last visit, which was a month or so ago. So he was doing great!

How we were told the procedure would go is that Dr. Smith would pull the tube tight against Bert’s body and snip the tube. The bulb part that was in Bert’s belly would pass naturally. Since it was a rubber material it should have disintegrated somewhat over the last four months and should be easy to pass. Dr. Smith came in and examined Bert and said he looked fantastic! He looked at his tube site and began pulling on the tube a bit. We figured it was to pull it taut so he could cut it. To all of our surprise he pulled one swift time and pulled the entire tube out!!!

I don’t think Bert noticed at all!! He got a bit grumpy being held down but I don’t think he realized the tube had been removed! LaLena thought he was going to cut it too. It shocked us and we all laughed at the same time. I said “Well, that was abrupt”! The tube was in remarkably good shape. Dr. Smith thought it would be a bit more deteriorated than it was. I think I’ve described it before but it’s a little bulb on the end of the tube with holes in it. When Dr. Smith pulled it out (since it’s rubber) it collapsed on itself and slipped right out of Bert’s site.

It was literally over in about two seconds. The entire visit was about ten minutes and then we were on our way. I told Dr. Smith and LaLena (and Tracy another great vet tech) thank you. I said that I felt like they saved Bert’s life. All three said at the same time that *WE* saved Bert’s life with our dedication to him. It made both Mitch and I feel very good! I wish that Dr. Smith could be our regular but he’s a by referral only specialist. We adore him and we were both actually sad to be leaving! Other than a few follow ups to have Bert weighed, we won’t be going back! It was very bittersweet!

When we got home and let him out of the kennel he looked so naked to us! It’s been four months since he didn’t have his sock on. He came out of the kennel and literally ran around the house! He was so happy! I was afraid that going to the vet would make him regress a little bit but it didn’t phase him AT ALL. He came in ran around, laid in the hall flicking his tail and then had a bite to eat. He’s such a nut.

Here’s a picture of Bert right after we got home. 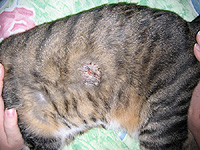 It’s of his site minus the tube. It’s a bit yucky looking, but Before the tube was removed he did have some of the tissue growth still and I think that is what’s holding up the healing process now. It’s still got a bit of that pink tissue poking out. Dr. Smith said that with in a few days it’ll be hard to tell where the site was.

There is an abundance of products and services available for our feline companions, including feline toiletries, restaurants, and health spas; therefore, it was just a matter of time before specialized computer software was developed exclusively for cats. This week, we will talk about just some of the software products available for our cats and many of them available at no cost.

For those who just want to dress up their computer desktop with various feline based themes, cursors, fonts, icons, screensavers, wallpaper, and locate links to other software sites,

For most, this site will be considered “one-stop shopping”, but if not, then using any internet search engine will produce a vast array of links to software developed exclusively for cats. You will find that you will be able to spend hours exploring all the information in it and its links.

For those interested in software to entertain your feline companions, through a little research on the internet, Melissa found a computer game designed exclusively for cats! CyberPounce® is a computer game designed for cats by designer Matt Wolf who got the idea when cat sitting for some friends. He noted the cat’s fascination with the cursor movement on the screen and set to work

creating a game that would produce objects that would move quickly and randomly across the screen and enable the user to select particular objects, in addition to many other animations that would interest the cat. In this paragraph is our Melissa checking out their Home Page.

The first challenge that Mr. Wolf faced was that the product had to be designed for two audiences, that is, cats and people. Why, some may ask? Amanda answers this question by stating that cats don’t go shopping and don’t have credit cards-people do! Get the picture? Designing the product to appeal to people turned out to be the easy part, as the cats turned out to be more of a hard sell.

Mr. Wolf employed an applied animal behaviorist as a consultant who helped him understand what attracts cat’s attention and how to maintain it. Ultimately, after designing the game and testing it on 100 cats, he found that it earned a 72 percent response rate.

In order to be able to entertain the most cats, the game was designed to be highly configurable by the cat’s human companion, through many cleverly designed menus. The menus offer the user a selection of six different cursor characters and five animated toys. Some of the cursor characters offered are a goldfish, spider, and a frog and the user is able to exercise control of all of them. The toys consist of feathers, a laser pointer, a toy mouse, a cartoon cat, and a top, whose movements catch

and hold the attention of cats. A second version of CyberPounce is in the works, and for those interested in learning more details about the product or purchasing it, you may visit the CyberPounce web site at:
www.cyberpounce.com

Well, it’s getting near that time of year when most of you are planning those annual vacation trips to exotic places; maybe the French Riviera, La Paz, or perhaps roughing it in the high mountains of northern Portugal.  Ahh, just the thought of it makes us tingle all over, eh?  Fluffy is tingling all over too, but not for the same reasons.  First and foremost, I think most of us would agree that cats seem to “read our minds” quite easily, and while they may not know where Barbados is, they do know that you’re giving serious thought to some kind of evil doings.something that’s sure to upset their cherished routine.

So, assuming the furry element(s) of our family won’t be going along with us, we need to balance the planning to include them.  And we’ll start with a simple recognition: Cats are very social creatures, and they’ll be left without their “family”; know up front that this is going to be highly upsetting for them, and know that even the best babysitter won’t replace you!  There are any number of situations to cover for our extended absence, and I suppose that any given scenario is “best” or “worst”,

depending on who’s calling the shots.  In light of that, I’ll outline.in ranking order.my own list of optional Kitty Coverage programs.

1.      In-home house sitter would be my first choice, and while I make no inference against younger folks, I’d go for an older person if given the option.

2.      Nearby neighbor who can stop in at least a few times daily, and preferably one who can spend a few minutes per visit.

4.      Friend, neighbor, or co-worker who promises to stop by when time permits.

5.      Kennel.this would be not only my last resort, it’s an option I’d consider only in an extreme emergency (which a vacation surely is not).

No matter what program you choose for making sure the kitties are fine while you’re gone, I’ll point out a few generic considerations to be aware of:

Disclaimer: Kathy Fatheree is not at all a medical expert. Contents of this web site are a collection of Kathy’s assist feeding experiences as well as the experiences of other cat owners who have assist fed their cats. While every effort has been made to ensure the accuracy of the information, Kathy Fatheree or anyone associated with this web site cannot be held responsible for anything that may happen as a result of using the information on this site.